This billboard — on Vancouver Island’s busiest highway – could capture the attention of BC NDP voters, MLAs, hundreds of thousands of British Columbians — and even Premier Horgan himself. 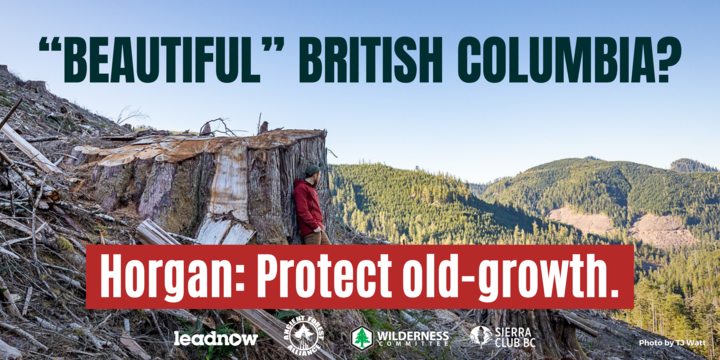 Will you chip in now for a hard-hitting billboard ad on Horgan’s home turf — to force him to finally deliver on his promise to protect the last remaining old growth stands?

Clicking the button below will open a new window which will direct you to PayPal. Once you've completed your donation via PayPal you will be brought back to this page.

Clicking the button below will redirect you to PayPal. Once you've completed your donation you will be brought back to this page.

You will receive a confirmation email,
if you do not please contact [email protected]

Thank you for your donation.


Something has gone wrong...

Click here to go back and review your details

Increase your impact by becoming a monthly donor

Leadnow is an independent organization funded by people like you. Our monthly sustainers allow us to focus on longer term impacts and work on deeper, systemic change.

Leadnow is sustained by thousands of small, individual donations from across the country. Can you chip in to help fund our hard-hitting campaigns?