This month, 7,284 Leadnow members shared their campaigning priorities as part of a major Community Survey to set our collective direction for 2017.

Our member-driven approach is part of what sets Leadnow apart -- everything we do, from the issues we campaign on to the way we do our work, depends on the input, actions, and donations of the hundreds of thousands of you who make make up our community.

Now, we’re excited to share your results and what they mean for our work.

Your top priorities for 2017 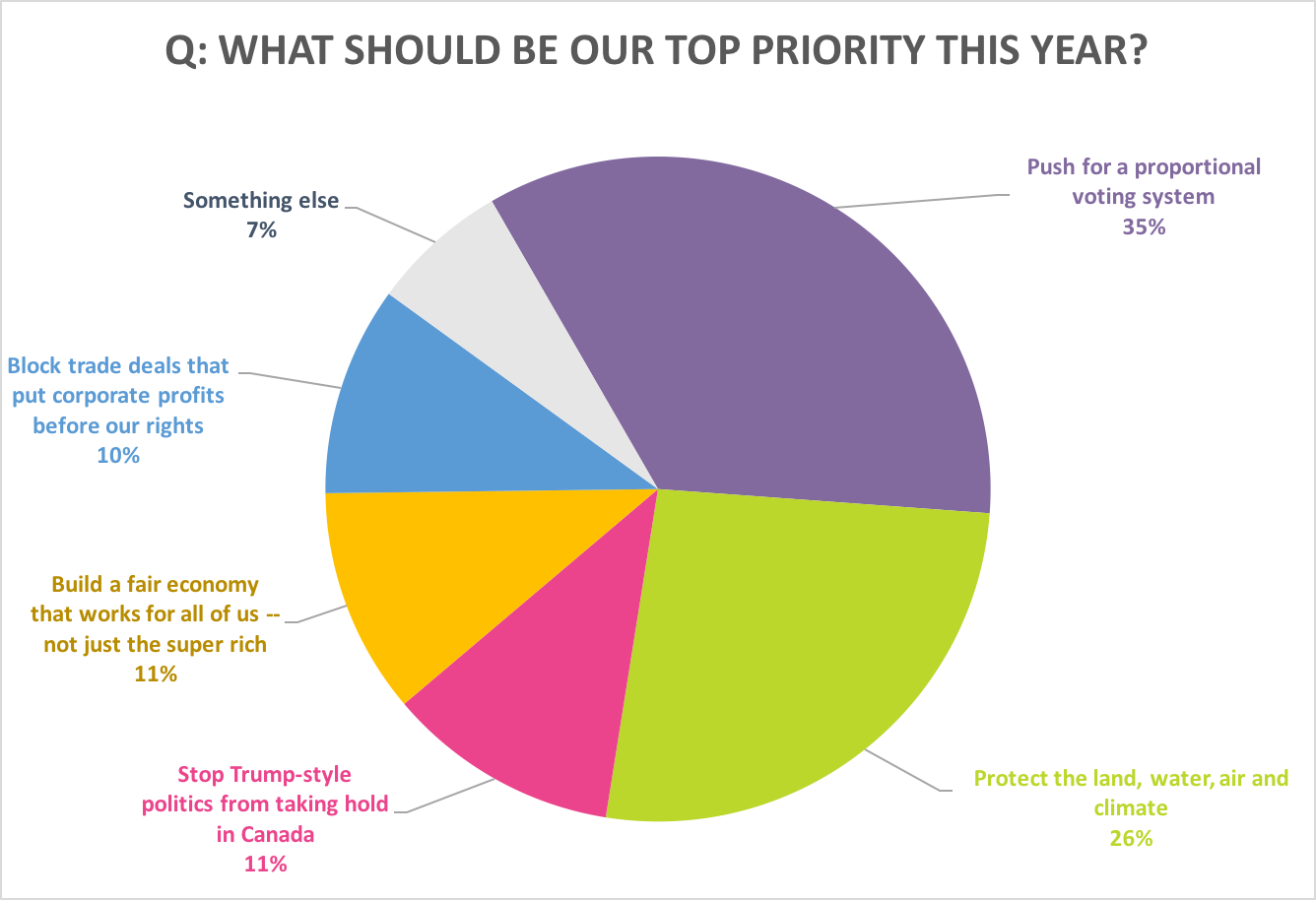 We heard loud and clear that campaigning to replace our broken first-past-the-post system with a proportional system needs to be a top priority this year. Our Democracy Campaigner, Katelynn, is already getting to work on a strategy to ramp up our Vote Better campaign this year.

Hundreds of you wrote in comments emphasizing that these issues are all important. We’re working on developing more nimble “rapid-response” capacity, so we’re ready to spring into action with hard-hitting campaigns at key moments on any of these issues.

The campaigns you’re most excited about.

When we asked you to rank the campaigns you were most excited about, we again saw voting reform and climate action rise to the top of the list.

In previous surveys, we’ve consistently heard that you want more opportunities to take action on social justice issues with Leadnow. In this survey, we asked you to get specific on your priorities, and reconciliation with Indigenous people and fighting racism and white supremacy topped the list.

We’ve worked with First Nations in some past campaigns -- you helped crowdfund for First Nations legal challenges against the Enbridge pipeline, or thousands of you signed a petition to clean up the Grassy Narrows First Nation’s river. This year, we’ll work to build the relationships and capacity needed to do more focussed campaigning in solidarity with indigenous communities.

We’ll also begin to explore options for how our community could help fight racism and white supremacy, and watch for opportunities to campaign on other highly-ranked justice issues.

How the Trudeau government relates to your values

We’ve asked you this question in two previous community surveys -- the first just weeks after Trudeau’s government took office, and a second time in a survey last summer.

In all three surveys, a majority of the Leadnow community has indicated that the Trudeau Liberal government shares some of their values, and will do the right thing in some cases, but that we’ll need to work together to raise the bar in other cases.

We expected to see some decline in support for the government, after their recent approval of the Kinder Morgan pipeline, and their widely-criticized handling of the voting reform file last fall. The government will need to course correct or risk losing even more progressive support.

Leadnow’s approach to campaigning in the Trudeau era 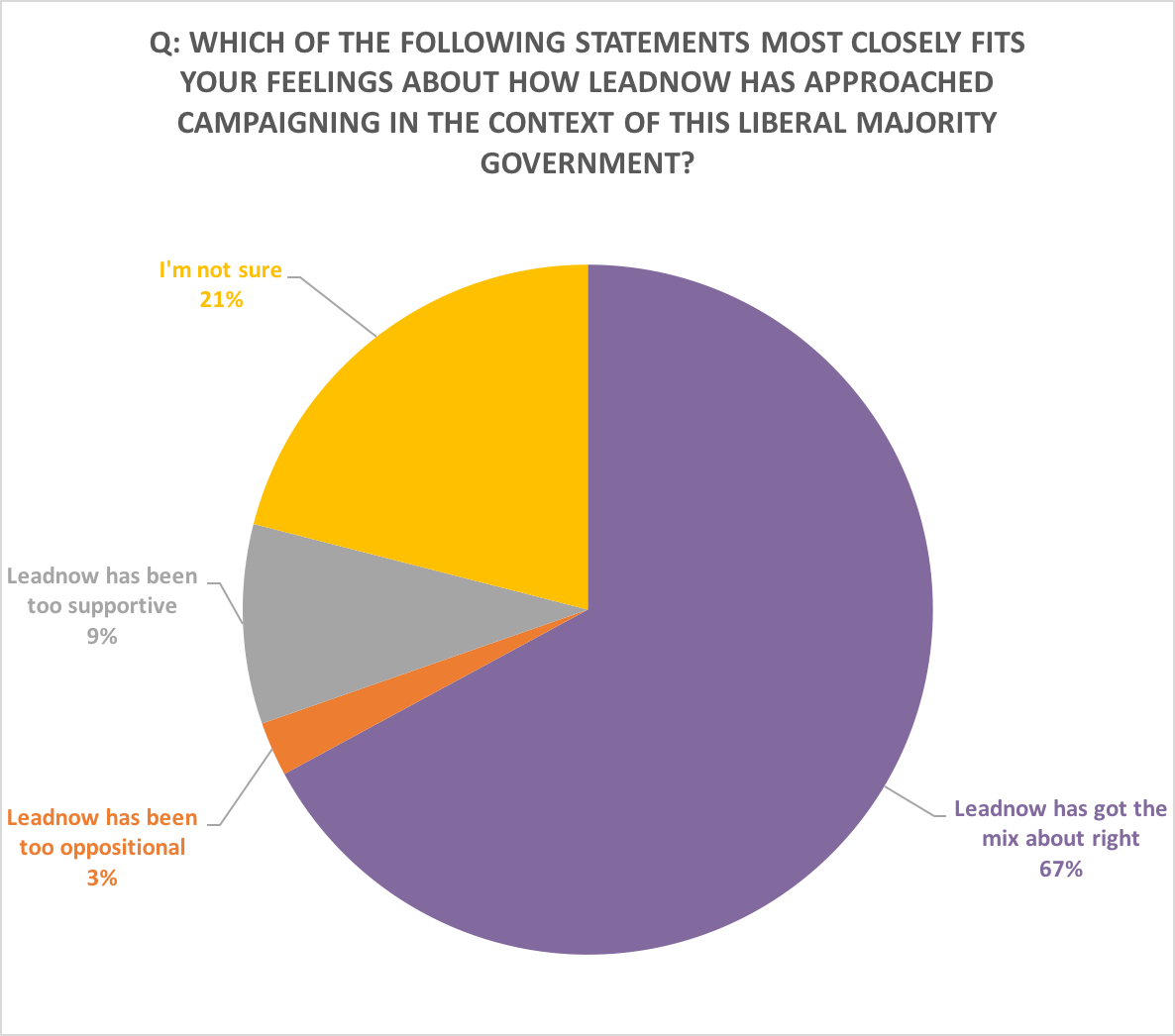 In a community survey right after the election, the Leadnow community voted to adopt a “support and push” approach to the government -- supporting them when they’re doing the right thing, pushing for improvement when there’s room for them to do better, and opposing them when they’re moving in the wrong direction.

So, are we getting the mix right?

Overall, the majority of the Leadnow community think we’ve got the mix between supporting the government and pushing them to do better / opposing where necessary about right. We see that very few people think we’ve been too oppositional (3%), while a larger portion (9%) think there is more room to push the government harder on the issues.

We’re glad to see most of our community thinks we’re more or less on the right track. Moving forwards, we’re seeing a degree of shift within the Leadnow community toward pushing the Liberal government a little harder on the issues, and we will be considering that as we develop our campaigns this year.

2017 is going to be a big year, with lasting consequences for the future of this country, and the world.

This year, Trudeau could write his major progressive promises into law this year -- or give in to pressure from corporate lobbyists to preserve the status quo. Trump-style politics could take hold in Canada -- or we could come together as a country to reject the politics of fear and division.

It’s time to get to work. Planning is already underway to scale up our Vote Better campaign for voting reform, your top priority issue. At the same time, we’re building up our capacity for rapid-response campaigning, so our community is ready to strike fast in key moments, to push for change on the issues this community cares most about -- from the environment and healthcare, to reconciliation with First Nations people.

Leadnow.ca is an independent voice—a way for hundreds and thousands of us to speak truth to power, regardless of who “power” is. To preserve that independence, we don’t take big checks from government, CEO’s or corporations—we’re funded by small contributions from regular people like you.

If you value the work of our Leadnow community, please donate to make sure our community has the resources we need to make our voices heard.